The fact that we live in a binary world, ruled by polar opposites for everything, is old news. The real news is that the post-pandemic scenario might offer a chance for breaking this binary system permanently.

Elementary distinctions between male and female, good and evil, local and foreign, black and white, right and wrong and so on, have shaped society ever since the rise of cartesian philosophy in the XVII century (some might argue even it was even earlier) and, in doing so, have become unquestioned and permanent values of contemporary society – to the extent that we have even transmitted them to algorithm-dominated machines. In actual fact, relentless efforts to promote integration and mediation between opposites are crucial for the refinement and development of ourselves and our culture, as so many recent events demonstrate.

The dichotomy surrounding centre and periphery belongs to this tradition of binary thinking; at global scale, it was the base of geographical, economic and political structures of all colonialist systems, where everything was determined by its relationship with the centre, detaining absolute power. The fact that English language is one of the official languages of an island in the middle of the Mediterranean, at the border between Europe and Northern Africa, is perhaps one of the most tangible consequences of twentieth century adaptations to ‘the centre’. Over the centuries, Malta metamorphosed from periphery and bastion of the Christian Catholic world into colonial outpost of the British empire, and most recently into young European nation, at border once again but with a chance of emancipation from the tyranny of the centre.

Just a couple of decades ago, this opportunity became more real than ever thanks to the digital revolution and its new hyper-efficient communication technologies: peripheries were re-imagined as new centres and Malta seemed to move a little closer to the continent, as a potential new centre in the so-called ‘global village’. However, the perspective remained calibrated on the centre/periphery dichotomy, therefore still guided by and gravitating around the ‘old centres’. No viable alternative to the original dichotomy took root until the current health emergency that swept away all certainties hit: out of frantic necessity, like in a coup d’état, the domination of the centres was swiftly overthrown, and decentralisation adopted as the new model. At urban level, suddenly peripheries became safer environments, and, at both urban and global level, geographical location didn’t matter any longer – or not as it used to.

During lockdown, when everyone was confined to their homes or their neighbourhoods, the question ‘where are you?’ was either totally irrelevant or referring to an online location. A whole new typology of centres materialised online, and the real marginal area became the realm of the offline. As predicted by Marshall McLuhan in The Medium is the Message, “Time ceased, space vanished. We now live in a global village […] a simultaneous happening”. The pandemic accelerated the process initiated by the digital revolution and suspended all notions of normality – the idea that anything less than a 40-hour working week with 3% unemployment rate is a social failure seems now almost archaic, opening up new possibilities for change.

Certain pre-pandemic notions and conditions perhaps will be reinstated, but many will have undergone such deep transformations that they will reach the post-pandemic phase truly renovated. The current crisis offers the most tangible opportunity we have ever had in modern times to dismantle the hierarchical relationship between centre and periphery and to seeany area become a new centre in a decentralised world. To decentralise also means to decolonise: to reject the tyranny of the centre, be it an urban area or a historically dominating influence, is in fact an act of decolonisation.

Political aspects of spatial thinking will play a crucial role in the present transitional phase. Malta, periphery since always, might find new and more successful ways of existing in between worlds and beyond the limits of pre-pandemic imagination, and emancipate itself from the centre/periphery dichotomy. In order to do so, binary thinking will have to be abandoned in favour of some more critical thinking  – forgive the binarity of the consideration. 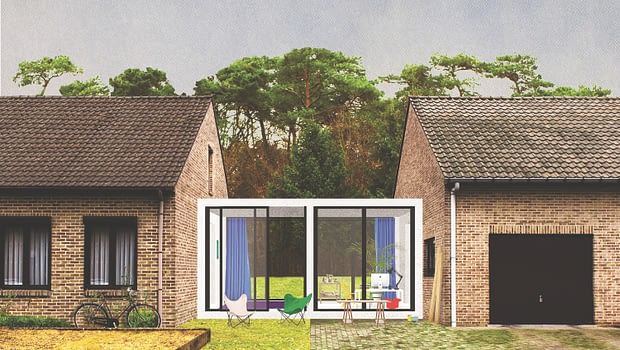 How will we live together?...

From Storage to Sculpture

Malta-based artist and designer Tom Van Malderen applied curves and colour to brighten up a passagew...

Debunking the most common (and dangerous) greenwashing myths

Since categorising and labelling form is the cornerstone of contemporary positivistic society, respo...

The opening of the retrospective at the Triennale (Milan) sadly coincided with the passing of the gr...

Our cultural heritage is at stake. Despite Malta’s artistic and historical wealth, a large part of...

“Buildings should be just like poems. The impression a building makes on our senses should arouse ...

A Twist in Nature

Finn Blythe goes to see Bjarke Ingels’ Twist - the latest addition to Kistefos, one of Scandinavia...

A no holds barred take on one of Valletta’s most well-known and most hotly disputed venues. By Li...

Meandering Furniture for a Valletta townhouse

Sculptor and exhibition designer Tom Van Malderen recently completed the design and creation of a se...

The mystical, mythical beauty of the thirteenth century San Galgano Abbey in Tuscany. By Richard Eng...

Pinterest has never attracted as much attention and media scrutiny as the likes of Instagram and Fac...