Arts Council Malta (ACM) is the commissioning body responsible for Malta's Pavilion. Artpaper talks to Dr Romina Delia, Internationalisation Executive at ACM, about the Council's commitment to establishing Malta's presence at this prestigious event and her role as Project Leader of the Malta Pavilion at La Biennale di Venezia

The Venice Biennale was founded in 1895 by the city of Venice. It was conceived during the height of the Great Universal Exhibition, a cultural phenomenon that took continental Europe by storm after England’s Crystal Palace Exhibition in 1851. Yet, despite its longevity, Malta features very sparingly within the landscape of the Biennale’s history.

Dr Delia explains that in 2015, plans were set for Malta to have a more permanent presence at the Biennale. “I was asked to commission and project lead on behalf of ACM, the return of the Malta Pavilion. For the past seven years, this has formed part of my portfolio as the Internationalisation Executive at Arts Council Malta, falling within the strategy department of the Council.”

In 2015, Dr Delia set up initial meetings with the Biennale organisers to re-introduce Malta’s participation in the 57th edition in 2017. “After viewing several sites, we decided to choose the space that hosted the Tuvalu National Pavilion in 2015. After an absence of 17 years, Malta was about to proudly return to the Biennale with its National Pavilion located in a central location in the Arsenale.” “We had made sure the location was central as we wanted all the visitors of the Biennale to literally pass through our pavilion. Over 600,000 visitors at every edition and over 6000 international press.”

A few months later, Dr Delia, coordinated an international open call for curatorial proposals, presided over by a jury composed of local and international curators. Artist-curators Bettina Hutschek (Germany) and Raphael Vella (Malta) represented Malta in 2017 with their playfully poetic Homo Melitensis: An Incomplete Inventory in 19 Chapters. The pavilion interpreted and defined the notion of “Malteseness”, cleverly weaving together an eclectic mix of Maltese artists and an array of local artefacts.

As its first foray into the Biennale in many years, Dr Delia recalls having to start from scratch:  “I had no one in Malta to guide me, as the curator Adrian Bartolo and project manager Dennis Vella, who formed the team in 1999, had both passed away. So, I reached out to any entity I thought could assist.” She approached a mixture of public and private entities such as Malta Enterprise, Malta Tourism Authority, Heritage Malta, BOV, the Valletta Cultural Agency, and the Malta Presidency of the Council of the EU in 2017. Dr Delia maintains that the success of delivering such a project is thanks to the constant support of its collaborators.

The 2017 edition holds a special place in Dr Delia’s heart. As she explains: “most artists participating were relatively young to be participating at the Biennale, and having them, there was amazing. It was the opportunity of a lifetime. I was like, ‘wow- these are Malta’s future, and they are here at this international art event absorbing all!’. I had tears in my eyes.”

Yet another ambitious collaboration followed Malta’s 2017 offering. The 58th Biennale in 2019 featured Malta’s entry, Maleth / Haven / Port – Heterotopias of Evocation, a pavilion curated by historian Hesperia Iliadou (Cyprus), whose curatorial inspiration was Homer’s Odyssey. It included newly commissioned work by artists Vince Briffa (Malta), Trevor Borg (Malta) and Klitsa Antoniou (Cyprus). Their work examined Malta’s unique position in the central Mediterranean,   providing a contemporary reinterpretation of our timeless need of seeking Haven, most strongly experienced in times of crisis. Like vessels within a sea, the artworks come together, inviting the audience to participate in an intuitively playful dialogue, traversing the exhibition in a curiosity-driven voyage of self-reflection

This year, Dr Delia informs us that the 2022 Malta Pavilion, Diplomazjia astuta brings several individuals together: “Each curatorial team member has a solid track record. Even though the project might have seemed like a highly ambitious one on paper, the whole team has now proven that sometimes even what appears to be an impossible project can become a reality if people put faith and trust in each other. When people do their utmost to understand each other and put all their resources together- magic happens!”

Over the years, Dr Delia has worked tirelessly to bring each pavilion to fruition: “I am with the curatorial team every step of their journey, which is quite a roller-coaster ride, I must say, especially when dealing with curators, artists and other principal actors based in different parts of the world. I feel my role is to pull all the strings together, ensuring that the project is delivered successfully.” In addition, she works hand in hand with the directors, administrators and communications team at ACM and at the Venice Biennale headquarters, “without whose constant support and advice I would have never managed to get through each Biennale.”

Even though the work is challenging, Dr Delia maintains it is still a process she finds fascinating and rewarding. “Exploring each other’s cultures, attitudes, traditions, politics, histories, contacts, whilst learning to trust and understand each other and building something together” is part of this exciting journey. 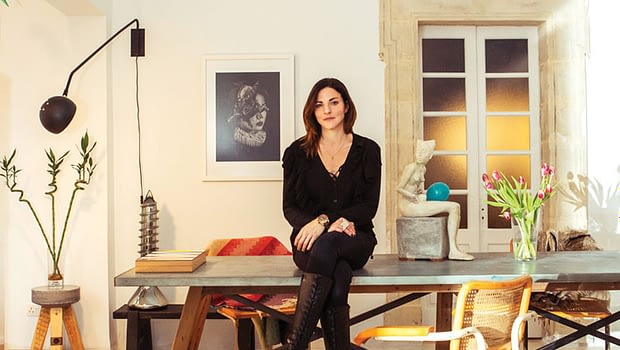 Gallerist and promotor: Maltese art to the forefront

Lily Agius established the Lily Agius Gallery in 2011 and is the founder and editor-in-chief of Artp...

This year's Malta Pavilion, Diplomazjia astuta, has been quite the journey and no small achievement,...

If God was an Octopus

... and other stories from the artist from Fgura who moved to Los Angeles...

In 2014 the establishment of ŻfinMalta, the country's first National Dance Company, was pivotal in ...